Gravitational wave astronomy is now a reality. Since the first detection, achieved in 2015, the network of gravitational-wave detectors (composed by the two LIGO in the U.S. and Virgo in Italy) has increased its astrophysical reach and it is currently detecting several signals per months and sending real-time open alerts to the astronomical community. KAGRA, the Japanese cryogenic and underground detector, after an intense commissioning activity, started observation from Feb. 2020.

Quantum noise is generated when "vacuum fluctuation" of electromagnetic field enters the interferometer from its output port. Vacuum fluctuation is an inevitable fluctuation of electromagnetic field arising from quantum mechanical uncertainty even when everything is kept absolutely quiet. There are two components in the fluctuation, phase and amplitude. Usually, those two fluctuating components are of the same order. However, we can change the ratio of them with a technique called squeezing using non-liner optical crystals. For example, we can reduce the fluctuation of phase at the expense of increased fluctuation in amplitude (2). Such a vacuum state with non-equal fluctuation in phase and amplitude is called squeezed vacuum. 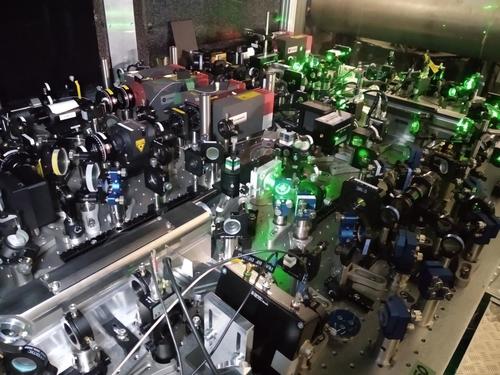 Conventional squeezing technology suffers from this trade-off. However, if we generate a squeezed vacuum which suppresses the phase fluctuation at high frequencies and amplitude fluctuation at low frequencies, we can reduce the quantum noise at all the frequencies. A team of researchers from NAOJ and other institutes succeeded in the first ever generation of such a frequency dependent squeezed vacuum at frequencies lower than 100Hz, which is necessary for the sensitivity improvement of large-scale gravitational wave detectors.

In this research, the research team constructed a filter cavity with the baseline length of 300m by modifying the prototype gravitational wave detector TAMA300 in the Mitaka campus of NAOJ. The filter cavity is a Fabry-Perot type optical resonator formed by two mirrors facing each other. When frequency independent squeezed vacuum is reflected by the filter cavity, frequency dependency is added. For large-scale gravitational wave detectors, the squeezing mode needs to be changed from phase to amplitude below 100Hz. However, this had never been realized before because changing the squeezing state at such a low frequency is difficult. The research team succeeded in the generation of such a vacuum state utilizing the long baseline of TAMA300 combined with the state-of-the-art low-loss mirrors and advanced control technology for vibration isolation systems developed in KAGRA. 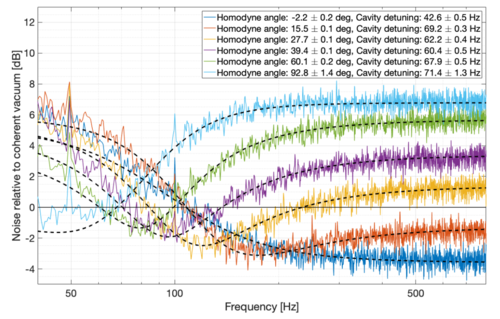 A paper reporting the achievement of this research was published on Physical Review Letters and it was also selected as an Editor's Suggestion. A similar result was achieved by a research group from Massachusetts Institute of Technology and their paper was published together with ours.

(1) A theory describing the physics of microscopic world such as atoms and elementary particles.

(2) Both phase and amplitude fluctuations cannot be reduced at the same time because it will violate the quantum mechanical uncertainty principle.